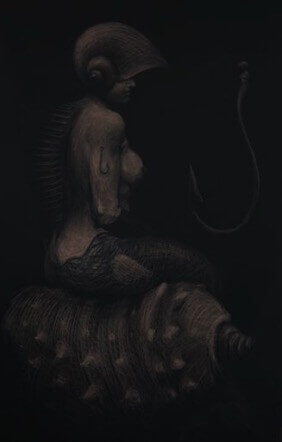 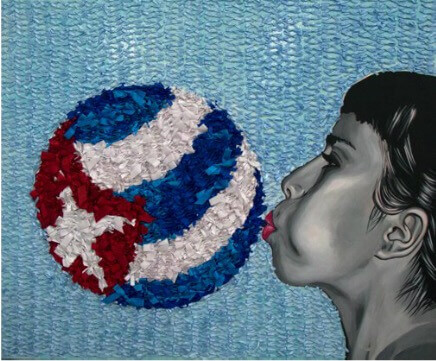 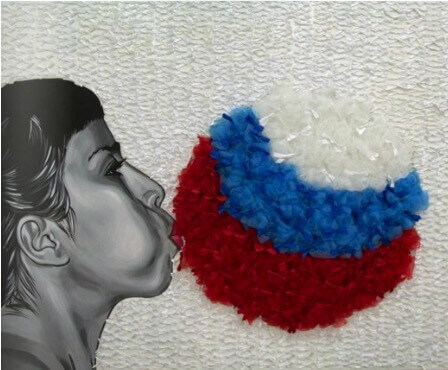 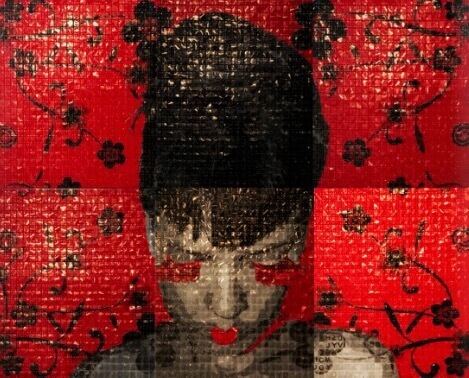 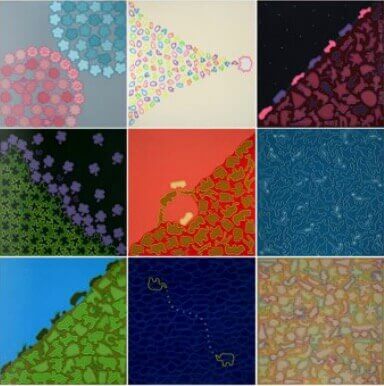 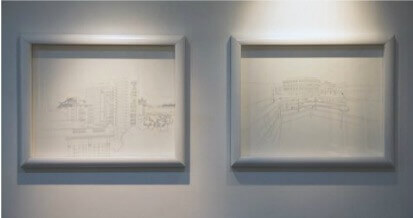 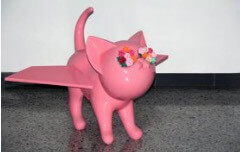 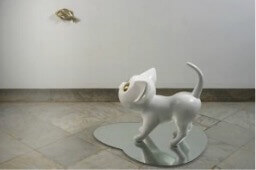 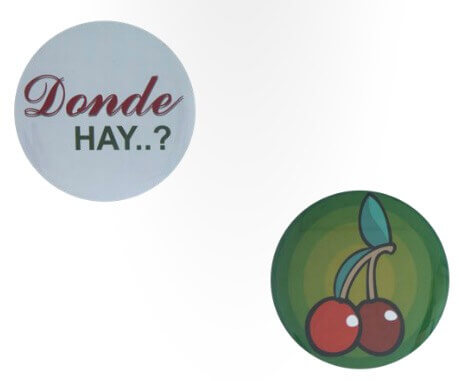 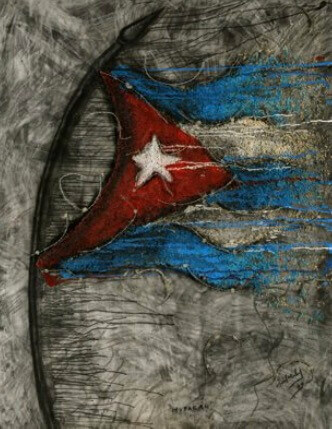 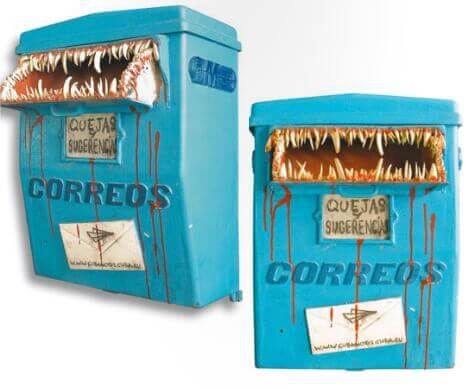 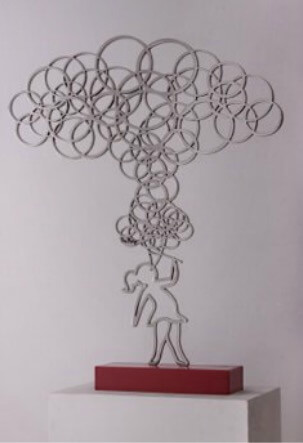 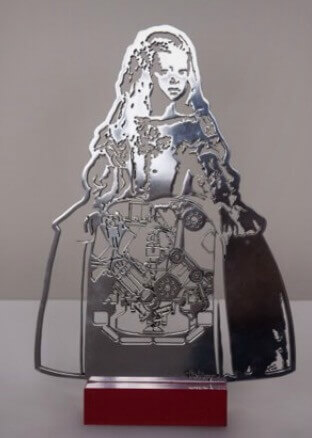 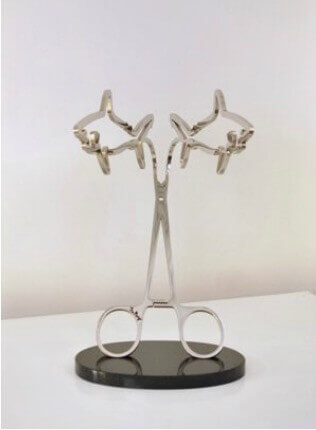 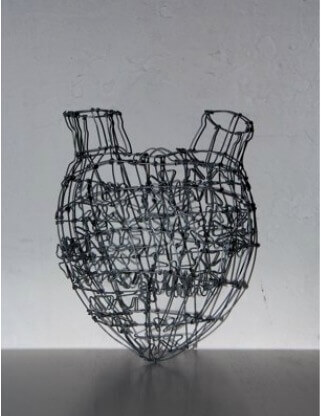 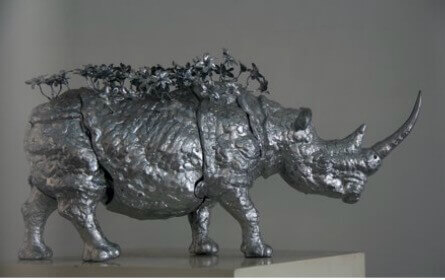 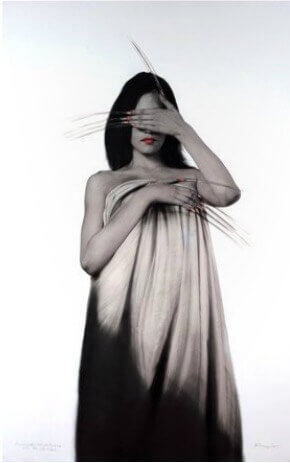 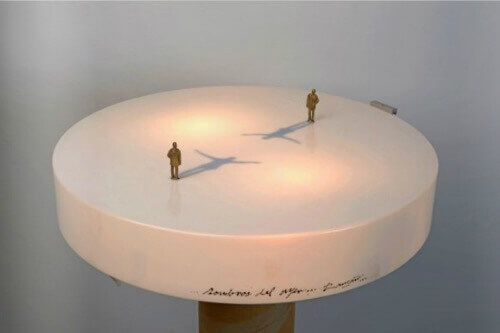 He is a Cuban painter, sculptor, and illustrator. Along with fellow Cuban artists such as José Bedia, Fabelo is a member of “the generation of sure hope” who emerged in the 1980s alongside the founding of the First Havana Biennial, at which Fabelo received an award. He has since become known for the absurdist humor he embeds in his watercolors and sculptures, such as his ongoing series of bare-chested women wearing tin pots or conch shells as hats. A prime example of his work is Viaje Fantástico (2012), one of the the largest non-memorial statues in Havana, which depicts a nude woman riding a chicken and armed with a fork. Fabelo has had many solo exhibitions outside of Cuba, including at the Museum of Latin American Art in California in 2014. Born in 1951 in Guáimaro, Cuba, he went on to study at the National Art School and at the Superior Art Institute of Havana. The Cuban government awarded Fabelo a medal for national culture, the Alejo Carpentier, for his outstanding artistic achievements.

Ernesto Rancaño  Vieties(born in Havana, Cuba, 1968) Graduated from the Academy of Arts of San Alejandro,  Cuba. His works can be found in permanent collections in Panama, Mexico, USA, Switzerland and Spain. Without doubt one of the most remarkable  artist at this time in Cuba.

With an aesthetics that some critics have called ‘post-medieval’, but that owes much to the interpretation of universal art and the exploration of national identity, installed in a fantastic space where any mixture is possible and where sorrows can be enveloped in softness and candour  a search for spirituality that traps the most diverse public can be found in the work of this artist.

In 2007 Ernesto  Rancano was in London as part on a Cuban Art exhibition and met the famous musician Sting, who later purchased several paintings to add it to his private collection of Cuban art.

William Pérez was born in Cienfuegos, Cuba in 1965. He studied at the Academia Nacional de Bellas Artes San Alejandro (1986) in Havana, with a focus on sculpture. Pérez works principally in assemblage, using locally-sourced materials to poignantly comment on working-class life in Cuba. Notably, Pérez is a founder of Grupo Punto, a group of young sculptors in Cienfuegos, Cuba. His work has been included in solo and group exhibitions in Brazil, Spain, the United States, Germany, Belgium, Denmark, Cuba and Martinique.

The-Merger, formed in 2009 is an artistic enterprise, a tactical union between three creators, Alain Pino, a graduate of the Superior Institute of Art of Havana, with a prolific work excelled by the installation and photographic language; Mario Miguel González (Mayito), cultural activist and self-taught creator and Niels Moleiro, self-taught photographer and painter with extensive experience in the field of economy of art. It is from this union that a common resource of creativity has been triggered. Greatly influenced by the present economic, social and political condition in Cuba, The Merger has culminated into a unified vision, an equation to their circumstance.
They were quoted as saying:
Starting with a bright color finish, and the use of the object magnified, chosen sometimes for its value as a cultural icon as in the case of the Swiss pocket knife, the stiletto, or the car tire, our proposal is very close to the Pop art, but we are also very interested in highlighting social and cultural issues. We often just play cynically with the most basic tools. It is a game with the idea of the popular concept. The social topic is expressed through the popular icons re-elaborated and adapted to new circumstances.
We intervene and manipulate the object to the point of subverting its original function, by mixing it with two or more other objects aiming to enhance its symbolic and anecdotic capacity. We believe that every object has a hidden story in its design as well as in its cultural and historical acquired meaning, and its recycling process in the art field. It is for that reason that any change or manipulation of the object can activate or deactivate its new meanings. So, we are not so much interested in what it is said’, but in how to say it, and try that the new re-assembled appliance structure new meanings.

HAVANA, CUBA — Acclaimed Cuban painter Michel Mirabal, known for his thought-provoking paintings of flags — sometimes made with flowers and barbed wires — will be one of the guests of Secretary of State John Kerry at a reception following the flag raising ceremony at the U.S. Embassy in Havana on Friday.

“It’s an honor for me,” Mirabal told NBC News. “I don’t deserve, but if you invite me, I go there. I’m going to be there because it’s a historic moment in our life.”

Mirabal told NBC News he first made a combination of the U.S. and Cuban flag several years ago when he felt there was a lot of confrontation between the two countries.

“I have in my mind a hope that once the two flags are in the same place,” he said.

The artist, whose paintings have been bought by diverse collectors such as Quincy Jones, Donald Trump, Muhammad Ali and Carlos Santana, said he thought “the people from the U.S., the government of the U.S. and the government of Cuba need to work, really work. They have to take off the mask.”

Lisandra Ramirez graduated from both the San Alejandro Art Academy of Havana in 2007 and the Superior Art Institute of Havana (ISA) in 2012.

She also studied bronze casting techniques in Spain and followed a course at the Tisch School of the Arts at the University of New York (NY), United States.

Lisandra Ramirez won various prizes such as 1st prize at the 2013 Cuban Contemporary Art Fair of the Galiano Gallery in Havana, Cuba and 1st Prize for the poster of the International Day against Violence for the Oscar Arnulfo Romero NGO in Havana, Cuba.

Adislén Reyes Pino is one of the artists to feature in PRESENTE! and will be coming to the UK for the show. She has been described as ‘a smart young feminist influenced by contemporary media culture’.

Although graduating from Havana’s prestigious Instituto Superior de Arte as recently as 2010, Adislén has already exhibited extensively in Havana and also beyond – in Washington DC, Boston, Taipei and Madrid. She teaches today at the San Alejandro Academy of Art in Havana.

Living and working in Havana Cuba, Mabel Poblet is one of the most highly sought-after young artists to emerge from the contemporary Cuban art scene. Graduating from the Higher Institute of Arts, Poblet also attended the San Alejandro Academy of Fine Arts where she was a student of Carlos Garaicoa. In 2005, she was awarded the Prize of the Jury at the Provincial Salon of Visual Arts (Cienfuegos, Cuba) and the Prize of the Provincial Council of Visual Arts at the Salon 5 (Cienfuegos, Cuba).

Born in Las Tunas, twenty two year old Marlys Fuegos took full advantage of the artistic freedoms afforded Cubans in the 1990s.  Exploring the divergent themes of the erotic and isolation and Cuban identity, her coy and lush velvet sculptures probe sexuality and aggression and her self-portraits with glitzy masks toy with notions of hidden and revealed identity.  In today’s Cuba, artists hide as much as they show— of themselves and the ruined island that is their home.  Unsurprisingly, this young talent has shown her work all over Cuba and has already had a solo show in New York as well as collective shows in South America. 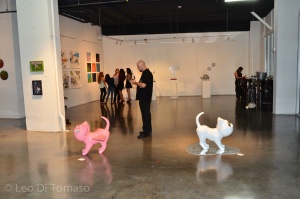 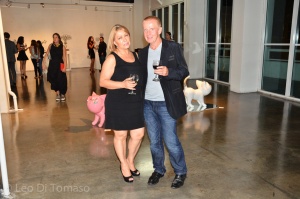 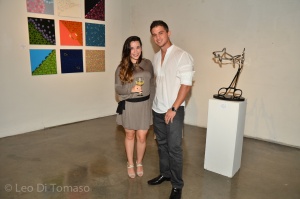 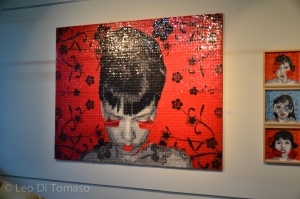 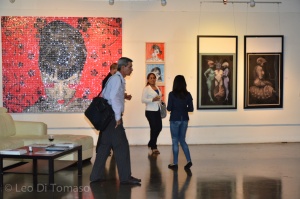 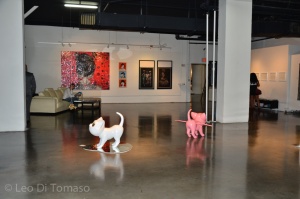